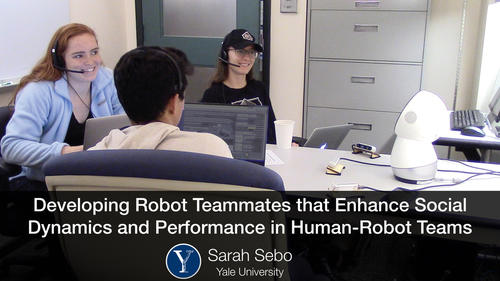 Lab member Sarah Sebo successfully defended her dissertation “Developing Robot Teamates that Enhance Social Dynamics and Performance in Human-Robot Teams.” Sarah will start as an assistant professor of Computer Science at University of Chicago in the fall.

Collaborative teams of people are most successful when they have positive social dynamics, where team members trust one another [Jones and George, 1998], feel included [Shoreet al., 2011], and feel comfortable to openly discuss mistakes and errors [Edmondson, 1999].Some  of  these  social  dynamics  have  even  been  shown  to  be  more  correlated  with  team performance than measures of individual intelligence [Woolley et al., 2010].  As robots increasingly join collaborative teams of people in a variety of settings (e.g.,  manufacturingplants,  surgical  suites,  corporate  workplaces,  homes),  it  is  essential  that  we  build  robotsthat can perceive and positively influence these social dynamics for the benefit of the team.

The work in this dissertation explores how social robots can enhance important socialteam dynamics in collaborative human-robot teams.  It specifically investigates how robot behavior  can  positively  shape  trust,  inclusion,  and  psychological  safety,  social  dynamics that have been shown to have a significant positive influence on team performance.  Our work demonstrates that a robot’s behavior can influence not just how people interact withthe robot, but how people in the group interact with each other.  Finally, we investigate away in which robots may be able to sense social dynamics in real time, by perceiving human backchanneling behavior,  and how social robots can shape this human social behavior in human-robot teams.

We investigate several robot behaviors (e.g., expressions of vulnerability, verbally sup-portive utterances) that have never previously been explored in the context of multi-person human-robot teams and demonstrate their ability to influence the team’s trust, inclusion,and psychological safety.  We first explore the benefits of a robot asking pairs of childrentask-focused and relationship-focused questions to improve overall collaborative skill in a collaborative task, finding contrasting effects on task performance and perceptions of task performance.  Next, we examine how to make the most effective trust repair in the context of a one-on-one human-robot interaction and highlight the benefits of a robot apologizingfor mistakes.  Then we extend this idea to a group context and investigate how a robot’s expressions  of  vulnerability  (including  apologizing  for  and  admitting  to  mistakes)  might influence trust-related behavior in groups, showing that robot vulnerability increases trust-related  behavior  expression  by  people  within  the  group  towards  one  another  as  well  as their conversational dynamics.  Following this, we explore two strategies to improve humanteam member inclusion in a human-robot team and highlight the negative effects of giving someone in the group a specialized role to interact with the robot and the benefits ofrobot verbal support.  Finally, we further analyze the role of robot verbal support withina human-robot team, demonstrating that robot verbal support may reduce the amount of verbal backchannel support human team members give one another.

We also suggest a method for perceiving group dynamics in real time through the recog-nition  of  human  verbal  backchannels  from  audio  signals.   Based  on  the  data  collected  inone of our human-subjects experiments, we found significant positive correlations between verbal backchanneling behavior and participant ratings of psychological safety and inclusion.  Thus, we believe that sensing human verbal backchannels can be a useful input for quickly perceiving social dynamics, enabling robots and other artificial agents to adapt their behavior based on real-time changes in social team dynamics.Taking into account all of our findings, we propose a set of guidelines for social robot behavior use in collaborative human-robot teams.  In these guidelines, we recommend social robot  behavior  for  particular  situations  and  contexts,  including  tense  interactions,  robot errors and mistakes, teams where one or more members may have a specialized role, andinteractions where someone feels excluded.  The combination of these guidelines, the resultsfrom  our  experimental  studies,  and  the  connections  we  made  between  backchannels  andteam social dynamics make a significant contribution to building robots that can positively shape the social dynamics and performance of human-robot teams.